Aaron had a lot of neck pain today.  When that happens, of course, he gets more pain medicine which often makes him sleepy.  He was tired today, but he stayed awake for his therapy sessions, and that’s a good thing!   He went off the vent onto the trach collar at approximately 7:15 this morning and stayed on it for…………………(drumroll)……………11 1/2 hours !!!!   Great job, Aaron!

We were told today that Aaron’s discharge from Magee will take place on November 6th.  Our plan (up until today) was for Aaron to go home to his Dad and Step-mom’s house upon discharge, BUT today we were thrown a curve; another option to consider, a facility that specializes in weaning patients from ventilators.  There are several close to home (Harrisburg, Lancaster, York) that we could consider if Aaron would choose to go that route.  He would be admitted as an inpatient and would still receive physical therapy, however, it would not be to the same degree  he gets now.  Their main focus would be getting Aaron off of the vent, which is Aaron’s primary goal right now.  This is a new option for Aaron to think about, as well as Jaime and the rest of his family.  Life and rehabbing would be easier for Aaron (and everybody involved with his care) if he could lose that apparatus!!!  So, stay tuned, we’ll keep you updated on Aaron’s next step in his journey!

One more thing.  Aaron and I were chatting this evening after he ate supper and we looked over at my husband, Sam, who (last time we looked) was watching TV, to find him sound asleep in Aaron’s bed.  I took a couple of pictures, because I knew when I eventually told Sam he’d been sleeping, he’d deny it, as he ALWAYS does.  I was correct, he did deny it.  I have the pictures to prove  it and I told Aaron I was going to post one on his blog, so here it is.  Just for you  Aaron.  And yes, he really was sound asleep…..doesn’t look too comfy.  Who looks like that when they sleep?   Is that normal????

And I continue to ask you to please pray for Aaron’s recovery.    Thank you everybody!! 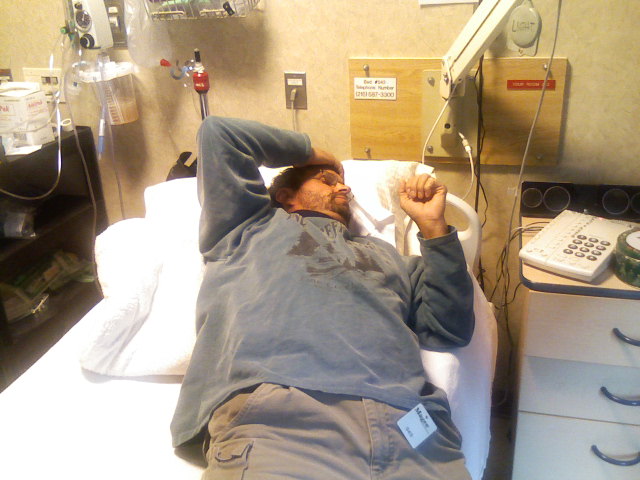